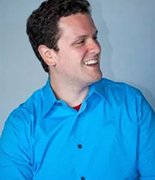 Adam Becker is an author, journalist, and astrophysicist. His book, What is Real?, is a subversive history of quantum physics, with an emphasis on the role of philosophy and personality in scientific debate. In addition to his book, Adam has written for The New York Times, the BBC, NPR, Scientific American, New Scientist, Undark, and other publications. He’s also recorded an animated video series with the BBC, and has appeared on numerous podcasts. Prior to becoming a full-time science communicator, Adam worked as a research in the Labs division of the Public Library of Science (PLOS); before that, Adam earned a PhD in cosmology from the University of Michigan and a BA in philosophy and in physics from Cornell University. Adam is currently a visiting scholar at UC Berkeley’s Office for History of Science and Technology. He lives in California.