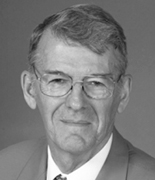 Before retiring, Bruce Carlson served as chair of the Department of Anatomy and Cell Biology and was also director of the Institute of Gerontology. His research was on limb development and regeneration and on the regeneration and transplantation of skeletal muscle, with more recent emphasis on regeneration after long-term denervation and during aging. In conducting his research, he has lived in Finland, the Netherlands, New Zealand, Czechoslovakia and the Soviet Union. Along with numerous research papers, he has authored 15 books on embryology and regeneration and has edited 13 symposium volumes and translations. He is past-president of the American Association of Anatomists and also the Association of Anatomy, Cell Biology and Neurobiology Chairpersons. An avid fisherman and former fisheries biologist, he also writes articles for fishing magazines and has published a book on lake biology. He currently directs a long-term study on the growth of pike in an isolated northern Minnesota lake. He presently serves as a trustee of the Fetzer Institute and the John E. Fetzer Memorial Trust.