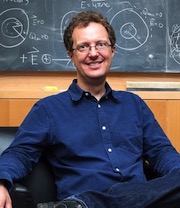 I’m a contributing editor at Scientific American magazine in New York, where I focus on fundamental physics and space science, although I’ve also written on everything from autism to throat-singing. I’m the author of two books on fundamental physics for the general public, Spooky Action at a Distance and The Complete Idiot’s Guide to String Theory. My reporting has been recognized by the 2011 Science Writing Award from the American Institute of Physics and the 2010 Jonathan Eberhart Planetary Science Journalism Award from the American Astronomical Society. Articles I’ve solicited and edited have appeared in The Best American Science Writing and The Best American Science & Nature Writing anthologies. I coordinated the single-topic issue “Crossroads for Planet Earth” in September 2005, which won a Global Media Award from the Population Institute and was a National Magazine Award finalist.