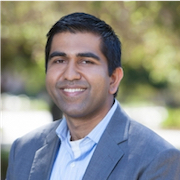 Neil Malhotra is the Edith M. Cornell Professor of Political Economy in the Graduate School of Business at Stanford University. He also holds a courtesy appointment in the Department of Political Science. He serves as the Louise and Claude N. Rosenberg, Jr. Director of the Center for Social Innovation at the Stanford GSB.

He received his MA and PhD in political science from Stanford University, where he was the Melvin & Joan Lane Stanford Graduate Fellow. He received a BA in economics from Yale University.