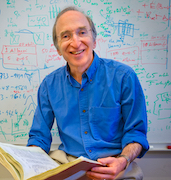 Saul Perlmutter is a 2011 Nobel Laureate, sharing the prize in Physics for the discovery of the accelerating expansion of the Universe. He is a professor of physics at the University of California, Berkeley, where he holds the Franklin W. and Karen Weber Dabby Chair, and a senior scientist at Lawrence Berkeley National Laboratory.

He is the leader of the international Supernova Cosmology Project, and director of the Berkeley Institute for Data Science and executive director of the Berkeley Center for Cosmological Physics. His undergraduate degree was from Harvard and his PhD from UC Berkeley. In addition to other awards and honors, he is a member of the National Academy of Sciences and the American Academy of Arts and Sciences and a fellow of the American Physical Society and the American Association for the Advancement of Science.

Perlmutter has also written popular articles, and has appeared in numerous PBS, Discovery Channel, and BBC documentaries. His interest in teaching scientific-style critical thinking for scientists and non-scientists alike led to Berkeley courses on Sense and Sensibility and Science and Physics & Music.