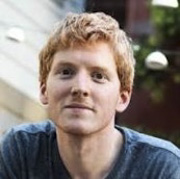 Patrick Collison is an Irish entrepreneur from County Tipperary. He is the co-founder and CEO of Stripe, which he started with his younger brother, John, in 2010. He lives in San Francisco, California. Stripe serves millions of technology companies in more than 100 countries. In 2018, he co-authored an essay with Michael Nielsen entitled The Diminishing Returns to Science, arguing that, as a society, we seem to be investing exponentially more effort in order to produce a roughly constant rate of progress. He previously studied math at MIT.