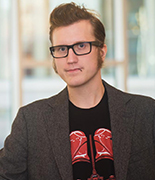 Sebastian Lundmark is a researcher at the Society, Opinion, and Media institute at the University of Gothenburg, Sweden. He received his Ph.D. in Political Science from the University of Gothenburg. After receiving his Ph.D., Sebastian worked as a postdoctoral researcher at the Communication Department, Stanford University, California. Since 2018, he works as a survey methodology researcher at a survey institute in Sweden. Sebastian is also the Principal Investigator of a three-year research project funded by the Swedish Research Council that aims to develop new techniques that will improve response rates among hard-to-recruit populations.