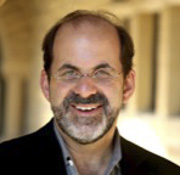 Winner of the American Association for Public Opinion Research’s Lifetime Achievement Award for outstanding research, and the Nevitt Sanford Award from the International Society of Political Psychology, Jon Krosnick is a social psychologist who does research on attitude formation, change, and effects, on the psychology of political behavior, and on survey research methods, as well as other topics.

He has been co-principal investigator of the American National Election Study, the nation’s longest-running academic research project exploring voter decision-making and political campaign effects. For two decades, he has directed a program of research tracking American public opinion on global warming. Dr. Krosnick has been elected a fellow of the American Academy of Arts and Sciences and of the American Association for the Advancement of Science. He has authored more than 160 articles (in journals in psychology, sociology, political science, communication, survey methodology, economics, and other fields) and chapters, and seven books.

Dr. Krosnick received a B.A. degree in psychology from Harvard University and a master’s degree and Ph.D. in social psychology from the University of Michigan, where he worked in the Survey Research Center and the Center for Political Studies.