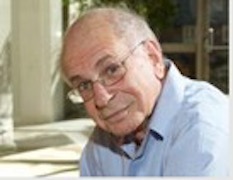 Daniel Kahneman is Professor of Psychology and Public Affairs Emeritus at Princeton University. He is currently involved in writing a book titled Noise, in collaboration with Olivier Sibony and Cass Sunstein. Their topic is the large contribution of unsystematic variability to errors of judgment and to poor organizational decisions.

Dr. Kahneman held the position of professor of psychology at the Hebrew University in Jerusalem (1970-1978), the University of British Columbia (1978-1986), and the University of California, Berkeley (1986-1994) prior to moving to Princeton. He is a member of the National Academy of Sciences and several other scientific societies and has been the recipient of many awards, including the Nobel Prize in Economic Sciences (2002), the Lifetime Contribution Award of the American Psychological Association (2007) and the National Medal of Freedom (2013).

Go to his presentation